From the 2010 inception of his website, which published people’s nude photos without their consent, to his arrest by the FBI in 2015, Hunter Moore was regarded as a god-like, Internet troll by fans. They congregated on social media, in the comments of his website, and at live events and parties that he hosted all over the country. By his side during this period of time was Hughes, a California-born model. In Netflix’s documentary, she recounts meeting Moore at a party and learning about his website when they began dating. She states that at the time, she refused to acknowledge that he was doing anything wrong.

But one day, years into their relationship, she came across her Facebook message requests, and found dozens of strangers either threatening her or begging her to ask Moore to remove their photos from his website. “I feel ashamed and upset, I just wish I had known better at the time,” she says in the doc. “One of my biggest regrets is not speaking up when I had a voice.” She explains that discovering these messages was her breaking point—when she was 22, she bought a one-way ticket to New York, leaving Moore behind. In January 2014, Hunter Moore was indicted by the FBI on charges of conspiracy, unauthorized access to a protected computer, and aggravated identity theft. 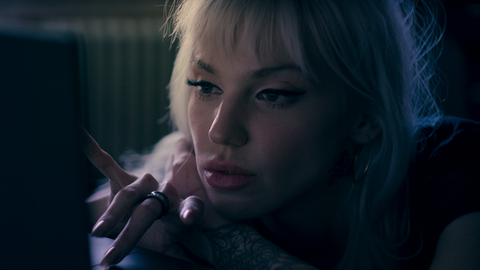 Today, Hughes works as a scenic prop designer and model in Brooklyn, NY. She is on Instagram at @middakidda, though she has not yet posted about Netflix’s new documentary in which she features. “I was a hurricane, troublemaker, rule breaker, you name it,” she says of her youth in a 2021 interview. “I wasn’t an easy kid to raise, just thinking about it scares me.”

Lauren Kranc is the assistant content strategy editor at Esquire, where she runs the brand’s social media accounts and covers pop culture and television, with entirely too narrow an expertise on true crime shows