Last fall, the Marvel Reddit-YouTube-comments-fan-theory machine dug up a sketchy-looking call sheet that pointed toward Bill Murray showing up in Ant-Man and the Wasp: Quantumania. Frankly, we thought it was bullshit that the notoriously hard-to-reach Murray would fly to Atlanta and embrace the superhero life.

Turns out: We were wrong. At Marvel’s massive San Diego Comic-Con panel on Saturday night, Quantumania director Peyton Reed showed up along with some rando named Paul Rudd. They debuted a trailer for the film exclusively to the crowd. Guess who shows up halfway through? Bill. There’s a fleeting moment in the preview, where we only see Murray’s big, beaming face. His character expressed surprise that he was standing before Michelle Pfeiffer’s Janet Van Dyne, apparently. Then, Murray’s gone as the trailer moves away to more antics in the Quantum Realm.

This follows an October appearance on Jimmy Kimmel Live!, where Murray had to reckon with his own Tom-Hollanding of his MCU involvement. (Murray apparently dished on his MCU moment to the German-language publication, Frankfurter Allgemeine Zeitung.) The comedy legend video-called Kimmel, doing a bit where he needed translators to help boost the eyes on his interview, apparently. Never one to pull punches, Kimmel brought up the Frankfurter Allgemeine Zeitung interview, and asked the man, directly, if he would be in the next Ant-Man flick.

“Well, I’m not supposed to say,” Murray said. “They’re making a movie, OK? And it has Paul Rudd, who plays Ant-Man, and there’s Evangeline Lilly, plays the Wasp. And Michael Douglas. I forget what his name is in the movie. And Michelle Pfeiffer. They’re all in the movie. But I am not at liberty to talk about it.” 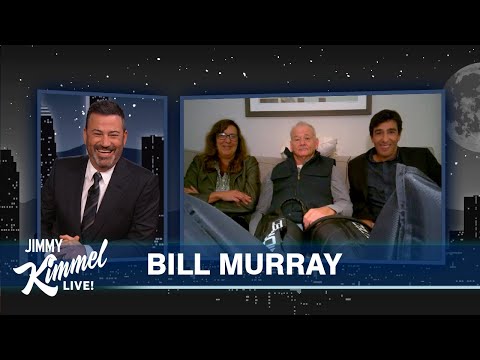 No word yet on who, exactly, Murray will play in the third installment of the Ant-Man and the Wasp franchise, where its heroes are set to battle a variant of Jonathan Majors’s Kang the Conquerer, but we’re hoping that the role amounts to much more than a cameo. For now, it seems like Murray’s character is an old friend/enemy/frenemy of Janet’s from her time in the Quantum Realm. One thought, though. Why can’t we see a super-powered Bill Murray, equipped with Scott Lang’s growing and shrinking tech? Add it to the Marvel wish list.

Either way, it seems like Murray will call it quits on his MCU involvement after Quantumania, per his Frankfurter Allgemeine Zeitung interview. “Let’s put it this way: the director is a good guy, and now I’ve at least tried out what it’s like to shoot a Marvel movie,” he said. “But I don’t think I need that experience a second time.”