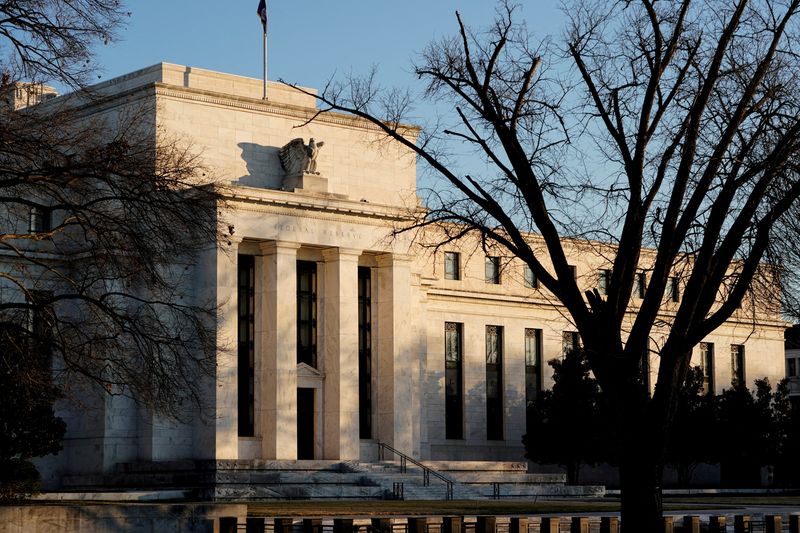 © Reuters. FILE PHOTO: The Federal Reserve building is seen before the Federal Reserve board is expected to signal plans to raise interest rates in March as it focuses on fighting inflation in Washington, U.S., January 26, 2022. REUTERS/Joshua Roberts

How to dampen inflation without slamming the brakes on growth? That’s the tricky job central banks face. But as others grapple with soaring prices, we will see how hard China’s COVID lockdowns are snarling up trade and slowing its economy.

And another complication — M&A deals worth over $400 billion are waiting for financing, but costs are rising fast.

Here is your week ahead in markets from Lewis Krauskopf in New York, Tom Westbrook in Singapore, Andres Gonzalez in Madrid; Dhara Ranasinghe and Karin Strohecker in London.

1/NAME OF THE GAME

Red-hot inflation is infusing central bankers with a sense of urgency. The Fed delivered its biggest rate rise in 22 years, Australia hiked by more than expected and India weighed in with an out-of-meeting move.

But the policy tightening rush is adding to the storm clouds gathering over the world economy, hit by soaring food and energy prices, war in Ukraine and China’s COVID curbs. The Bank of England while raising rates, also flagged recession risks.

Is U.S. inflation peaking after the fastest surge in over 40 years? The April consumer price index, due on Wednesday, will show.

March CPI came in at 8.5% on an annualised basis, as gasoline costs hit record highs. On a monthly basis, CPI jumped 1.2%, the biggest gain since September 2005.

Early forecasts are for a 0.2% monthly rise.

The March inflation surge probably sealed the Fed’s 50 basis-point rate rise on May 4. The upcoming inflation print could sway expectations for how monetary policy will be adjusted going forward.

China’s anti-COVID lockdowns give every indication of stretching through the spring. Alongside the strain on tens of millions of people, damage to the economic outlook – in China and globally – is immense.

And markets’ patience with limited policy support is wearing thin. If trade figures due Monday follow the recent spate of dire economic activity, then world growth forecasts, already deteriorating, will get even gloomier.

Iron ore, oil and prices are already wavering. In the teeth of a steep U.S. hiking cycle, the slowdown also bodes ill for the wobbling and in turn, for the foreigners who have placed their money in local markets.

Banning Russian oil imports seems to be a question of when, not if, for the European Union. The bloc is close to agreeing its sixth and fiercest package of sanctions against Moscow for invading Ukraine, according to the bloc’s top diplomat.

The centrepiece of the package is a phased embargo on Russian oil, which makes up over a quarter of EU imports. The move will push European refineries into a race to find new crude suppliers and leave drivers with bigger bills at the pump at a time when the cost of living crisis is squeezing consumers globally.

Meanwhile Russia will hold the annual May 9 Victory Day in Moscow to mark the anniversary of the Soviet Union’s triumph over Nazi Germany. The Kremlin dismissed speculation that President Vladimir Putin planned to declare war against Ukraine and a national mobilisation on the highly symbolic day.

Global dealmaking is recovering after a first-quarter slump caused by Russia’s invasion of Ukraine.

April M&A rose 30% from March to $387 billion, and included mega deals such as Elon Musk’s $44 billion buyout of Twitter (NYSE:) and a 58 billion-euro ($61.04 billion) bid by a consortium for Italian airport and motorway operator Atlantia.

Globally, more than $400 billion worth of deals have been announced since January but not completed, Refinitiv data shows.

M&A deals typically include ‘staple financing’, a pre-arranged package offered to potential purchasers to finance the acquisition. Once the deal is agreed, the buyer can syndicate the financing, inviting other banks to join. Or it can tap bond or equity markets.

But funding costs have spiralled since the deals were agreed. Average global corporate debt yields have soared 100 basis points since the Feb. 24 invasion, and by 150 bps on junk-rated U.S. companies, ICE (NYSE:) BofA indexes show.