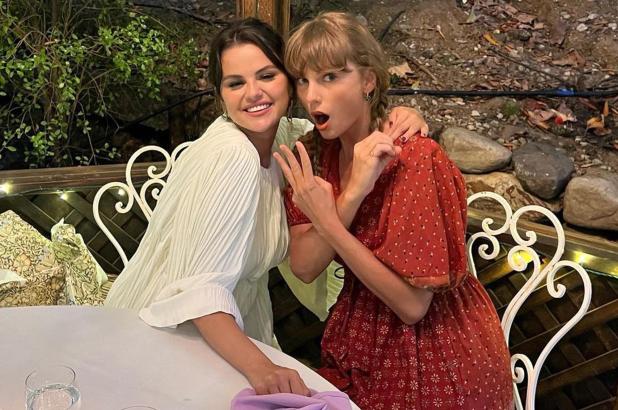 On Friday, the “Only Murders in the Building” star shared two photos of herself and Swift, 32, on Instagram. In one, Gomez grins while Swift has her mouth open in mock surprise while holding up three fingers. In the other, Gomez is in mid-giggle while Swift gives a thumbs-up to the camera.

“30, nerdy and worthy,” the birthday gal captioned the pics, which drew comments from fans including Camila Cabello who wrote, “COUPLE BAD BITCHES,” while Diane Keaton posted a string of hearts.

The two pals first bonded in 2008 when they were both dating members of The Jonas Brothers (Gomez was seeing Nick Jonas while Swift was dating Joe Jonas).

“We actually dated the Jonas Brothers together! It was hysterical,” Gomez said in a 2017 KISS-FM UK interview, when asked how she and Taylor first met each other. “It was amazing, because she was the girl with the big curly hair and all the bracelets and the cowboy boots, and I was definitely up-and-coming, and we just clicked. It was the best thing we got out of those relationships.”

The two have remained fast friends ever since.

In a 2020 interview with The Wall Street Journal Magazine, Swift said of her pal, “I knew from when I met her I would always have her back. In my life, I have the ability to forgive people who have hurt me. But I don’t know if I can forgive someone who hurts her.”

Gomez raved about Swift gushing to the outlet: “She has showed up for me in ways that I would have never expected. Flown in because I was hurt and was going through something.

“Stuff that was going on with my family. It’s been proven year after year and in every moment of my life that she is one of my best friends in the world. We don’t agree on everything, but we respect each other with everything.”