Yep, Kendrick Lamar has seen the viral video of security guard Devyn Sanford seemingly overcome with emotion during a performance of “Love” at his Houston show.

The video was posted by @dejaihvu on TikTok, and Devyn commented saying “That’s me in the post y’all… this song means EVERYTHING to me and I was feeling everybody around me emotions… definitely love getting paid to do this.”

Meanwhile Kendrick told Jazlyn Guerra of Jazzys WorldTV that the moment was ultimately an example of how powerful music can be.

“It’s really just about the feeling of it, you know? At the end of the day, past all the politics, past all the numbers, it’s what music makes you feel, how it makes you feel,” he said, per People. “So to see that , and shoutout to him by the way, ’cause I see him, bro. I was like, ‘Man, I wonder what he’s going through.'”

He added, “But at the end of the day, that’s how you want everybody to receive your music and, you know, make them feel good, make them feel like a moment they’re attached to, it could live forever.”

Watch the video below because it’s very sweet, and Jazzy is an amazing interviewer. As she told Kendrick after he dished some motivational advice: “As you said, it’s very good to be imperfect and it’s okay, because everyone is different in their own ways, and you should just love yourself for who you are.” 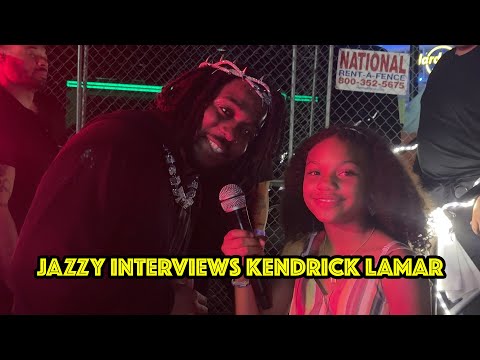 Mehera Bonner is a celebrity and entertainment news writer who enjoys Bravo and Antiques Roadshow with equal enthusiasm, She was previously entertainment editor at Marie Claire and has covered pop culture for over a decade.