Nearly two years after the search began, Jeopardy! finally has not one, but two permanent hosts. Today, Sony Pictures Entertainment announced that the show has entered into long-term deals with Mayim Bialik and Ken Jennings, who have been splitting duties behind the podium for months now.

“In Mayim and Ken, we have two outstanding hosts at the beginning of their Jeopardy! hosting careers who connect with their own unique fanbases, new fans, and the traditional Jeopardy! viewer,” executive producer Michael Davies said in a statement. “Mayim and Ken are both extraordinarily talented and simply lovely humans. They support the staff and each other. They love and respect this institution of a television program. In return, the staff and I are honored to work alongside them.”

Season 39 of Jeopardy! kicks off on September 12 with Jennings behind the podium. In addition to the standard nightly program, he’ll host the inaugural Second Chance Tournament, where contestants who “deserve a second shot” are invited back to the show, with the opportunity to level up into the Tournament of Champions (which Jennings will also host). Jennings’ run will last through December, while Bialik hosts Celebrity Jeopardy! in primetime on ABC. Then, come January, Bialik will host the National College Championship, a handful of unannounced new tournaments, and as many weeks of the standard nightly program as she can manage with her primetime commitment to Call Me Kat. 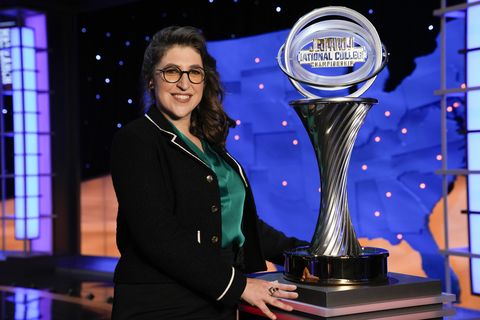 Davies went on to say, “We know you value consistency, so we will not flip flop the hosts constantly and will keep you informed about the hosting schedule.” Remember the Great Jeopardy! Host Carousel of 2021? Seems the producers have learned their lesson.

Hey, by the way, has anyone checked on disgraced Jeopardy! producer / wannabe host Mike Richards? Now might be a good time to scour Los Angeles sports bars and make sure he’s not weeping into a beer somewhere.