Twenty minutes into Bullet Train I stopped trying to sort out the affiliations and loyalties of the various thieves and assassins and operatives aboard an overnight train from Tokyo to Kyoto. Ten minutes after that, I stopped caring what badass was executing what form of grievous bodily harm to whom.

Bullet Train is one of those movies so taken with its own hip facetiousness—think of any of the Tarantino imitations that multiplied in the ‘90s the way Trump lawsuits do now—that early on you know you’re not going to have to expend any mental energy keeping the plot straight or any emotional energy having a stake in what happens. The filmmakers have already told you that nothing matters except hyper-stylization. The director, David Leitch, has a specialty in choreographed fight scenes and there are plenty, augmented with tossed-off brutality, apposite and ironic pop-culture tropes, double crosses, reversals, and, inevitably, a big destruct-o-rama to finish things off. You don’t have to worry about being grossed out or upset by the various shootings, beatings, stabbings, stompings, arterial spray, or flashbacks to a scene of mass projectile blood vomiting. (Somebody on the production team apparently really digs this; we see it four times.) I suppose in a way that it’s relaxing. The ruckus on screen is going to continue whether we pay attention or not and so you can just sit there, thinking about where you’re going to have dinner, and if you’ll make it home in time for MeTV’s 11: 30 p.m. Perry Mason rerun.

The moviemakers don’t find a way to make the big, sparkling clean commuter train into its own kind of toy and not just a setting. Think of the real luxury on display in train movies like Hitchcock’s The Lady Vanishes and Sidney Lumet’s version of Murder on the Orient Express. You’re not going to get that in an overnight commuter train, but the filmmakers might have shown a little everyday luxuriousness to make those of us consigned to Amtrak envious, the way we feel in North by Northwest when Cary Grant is able to order a Gibson and brook trout for his dinner. But Leitch and his production team don’t take in the train as anything more than the stage for their orchestrated mayhem, and that just seems one of the ways the movie fails to deliver the pleasure it promises. 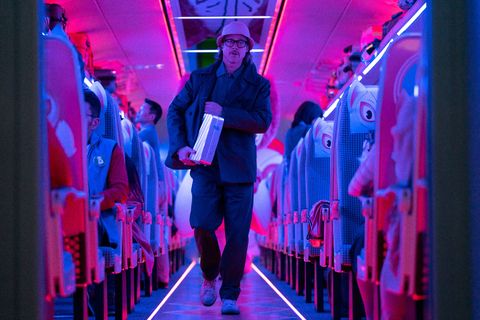 By the time this scene occurred, I no longer cared what happened.

The plot of Bullet Train has to do with a gaggle of shadowy types converging on the same choo-choo. Ladybug (they all have cutesy codenames—this moniker belongs to Brad Pitt) is back on the job after an apparent breakdown which he has overcome with the aid of a shrink and a nonending stream of psychobabble. There’s also the son of a crime kingpin known as the White Death (a name previously reserved for Kenny Loggins), rescued from kidnapping and now babysat by two operatives, Tangerine (Aaron Taylor-Johnson) and Lemon (Bryan Tyree Henry, who’s got an affable teddy-bear presence) whose shtick is warmed-over Guy Ritchie cockney palaver; a grieving father (Andrew Koji) looking to avenge the attempted murder of his small son; and a sort of aspiring assassin, killer schoolgirl division (Joey King) decked out in a private school uniform of clashing yet harmonious pinks. A variety of celeb cameos appear along the way, which we wouldn’t dare to spoil for you here. And there are also repeated cutaway shots to a poisonous snake slithering under the passengers’ chairs and after a while I was so sick of seeing that motherfucking snake on that motherfucking train, but then I was pretty sick of everything else as well.

The goal of several characters is to get hold of the attaché case holding the recovered kidnapping ransom, which keeps changing hands like the identical suitcases in What’s Up, Doc? and also with the gradually revealed motivations and connections of the characters. But since it’s played for snarky, wiseass gags, there’s no real reason to care even as they’re revealed.

A recent piece in Variety on producer Kelly McCormick referred to the film’s production company 87North and its “signature blend of hyper-violence and heart.” You could say that about the first John Wick (which Leitch co-directed, uncredited) but then that movie had at its center Keanu Reeves who probably couldn’t play insincere if someone was standing next to the camera pointing a gun at his head. Reeves made you feel exactly how much life went out of him when he beheld the corpse of his new puppy. It’s insulting to be milked for the sentiment that arises here because it’s so patently phony.

Leitch does have talent for physical staging. None of the films of his that I’ve seen suffer from the spatial incoherence which Michael Bay made the industry standard. You know where the characters are in physical relation to each other. But other than John Wick, I can’t recall a damn thing from any of those movies. All I retain of Atomic Blonde is Charlize Theron drinking iced vodka and smoking (mind you, that’s something I could watch for an awfully long time). And even the clarity of the fight scenes here are a hindrance. They just seem like a performance rather than a cleanly staged and filmed expression of the conflicts of the plot. In good action movies, action is character. Here, action is the means by which the characters pose. For a thriller, nothing here has menace. (You know a movie is incapable of conveying danger when Mr. Big finally shows up and he looks like the Flaming Lips’ Wayne Coyne having an off day.)

I would hate like hell to think of what we missed just so that we could have ‘Bullet Train.’

What makes Bullet Train bearable for as long as it is—and it’s a very protracted 126 minutes—is Brad Pitt. Brad Pitt has made shaggy dashing. Walking through the movie in black-framed glasses and a bucket hat, spouting his maxims of personal growth, he has the stoned capacity for comedy that showed before, in True Romance, and in his tripping confrontation with the Manson killers in Once Upon a Time . . . in Hollywood. (I’m grateful that when I saw Elvis I didn’t realize Austin Butler had played Tex Watson in that movie. Otherwise I woud have kept hearing Pitt saying, “and you were riding a horsey!”) He’s very funny and very charming. But after a while his laidback approach works against him as it begins to seem a part of what’s annoying about the movie—it’s determination to treat everything on the level of the put-on.

Pitt, like Paul Newman, is a movie star who became an actor, a guy who learned to express adult emotion and add that to the charisma that came to him so easily. He’s now something like William Holden was to the ‘50s, an example of a masculine movie star whose masculinity does not preclude vulnerability. Recently, Pitt announced that he is nearing the end of his movie career. Who knows if that will turn out to be true. But if Pitt’s performances are numbered, I would hate like hell to think of what we missed just so that we could have Bullet Train. Pitt is one of those rare presences who is a sensual pleasure to look at and an emotional pleasure to watch act. He’s too good to waste on the likes of this.

Charles Taylor is the author of “Opening Wednesday at a Theater or Drive-In Near You: The Shadow Cinema of the American ’70s.” He lives in New York.