Last weekend, Jennifer Lopez and Ben Affleck had their surprise wedding in Las Vegas and then headed to Paris for the honeymoon, accompanied by some of their children. The family has been super busy and it looks like the jet lag caught up with Affleck while rocking on the calming waters of the Seine River.

On Saturday, photographers caught Affleck taking a snooze during the two hour river tour aboard the Petrus III, a 71-foot teak yacht that was built in the 1950s, according to People. Also aboard the ship were Affleck’s daughters he shares with ex-wife Jennifer Garner, Seraphina and Violet, as well as Lopez’s twins, Max and Emme, who she had with ex-husband Marc Anthony.

It’s understandable that Affleck needed a nap, because the group has been all over Paris. They visited Musée D’orsay, the gardens of Elysée Palace, the Picasso Museum, as well as enjoying quite a bit of shopping. It seems like he rallied, because that night the couple was out again for dinner, looking refreshed and pressed in beautiful dinner wear. In photos of them leaving their hotel, they are holding hands and laughing and Affleck’s wedding ring is clearly visible. 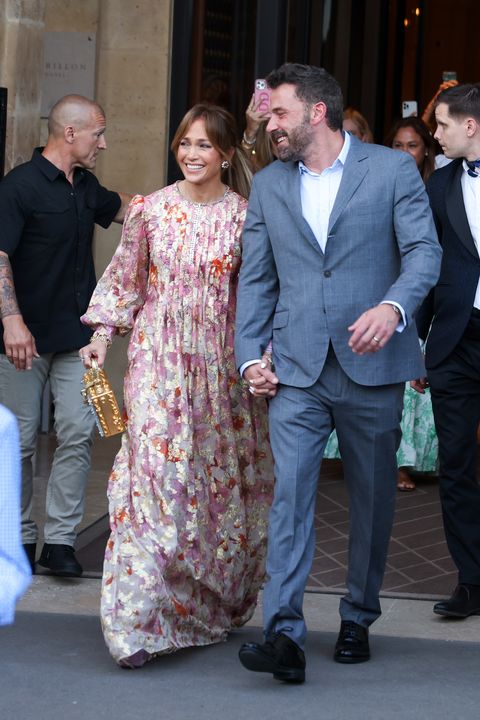 The couple was wed at A Little White Chapel in Las Vegas, and J.Lo shared details of the ceremony in her newsletter to fans, saying they barely made it in time.

“Last night we flew to Vegas, stood in line for a license with four other couples, all making the same journey to the wedding capital of the world,” she wrote. “We barely made it to the little white wedding chapel by midnight. They graciously stayed open late a few minutes, let us take pictures in a pink Cadillac convertible, evidently once used by the king himself (but if we wanted Elvis himself to show, that cost extra and he was in bed).”